So as I previously mentioned, I entered Battle High 2 A+ on a whim into MagFest's indie game showcase.  MagFest is an game and music festival near Washington DC.  Since there was no entry fee, I figured entering was a win-win.  If I got the game into the show, I'd get an awesome opportunity to show the game off; however, if it were rejected, I'd be able to enjoy the conference without the stress of presenting a game.
Fortunately for me, it was accepted!  It was a great learning experience that I would like to share.


What I Did Well

Since this wasn't the first indie showcase at MagFest, there was plenty of useful resources out there to prepare.  I believe I was pretty well prepared and did the following well: 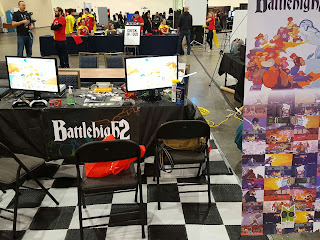 What I Could Have Done Better

This was the first time I had really shown off the game at a gaming venue, so there were a few things I could have done better. 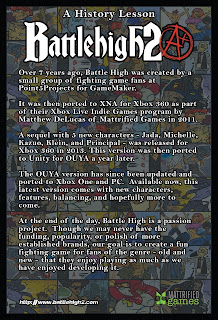 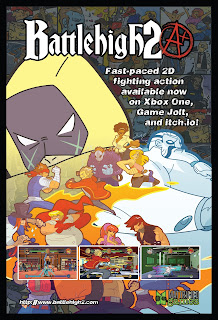 Another thing I did is I get pencils printed.  Though I thought this was a neat bit of swag, they didn't go as well as I would have thought -- and now I have over 300 pencils! Regardless, the misprinted postcards were probably the most frustrating part of this.


Overall, showing my game off at MagFest was a great learning experience.  I met with a lot of people who were enthusiastic to play the game as well as its future and some that even showed interest in working with me in the future on updates or new titles.  Sure there were some people who weren't interested or poked fun at the cheesy dialogue, but nothing heinous and nothing directed at me like "Go jump off a bridge!"  The worst comment I heard was "Oh geez, I never heard of this game before!" which mostly made me realize my lack of marketing.
I got to see people play the game in a competitive setting which is probably the best way to learn about the game and I learned a lot.  For example, I learned that Beat has a nasty high-low mix-up, and that Jada's Lightning Whip's are overpowered.  I also got to witness the first (that I'm aware of) Battle High 2 A+ tournament!  Sure there were only 12 entrants and 4 of them didn't show, but it was still awesome to see!


I also got to see the game played at MagFest Versus -- a Nick Arcade-like gameshow held at the festival.


Now, I've heard developers complain that sometimes cons aren't worth it, that a lot of people will say they like your game and will buy it but then "forget" to after the show, but you know what?  I don't really care.  I had a great time, learned a lot, and would love to do it again either at MagFest or another similar con with Battle High 2 A+ or another game!
Posted by Matt D. at 11:35 PM 1 comment:

So it's over a week into 2017, and I realized I haven't written much about 2016.  I wanted to take some time now and write a (semi) game-development-related retrospective of 2016, its highlights, lowlights, and maybe a midlight.

Lowlight:  Rushing a Game for IndieCade

Though it was a learning experience, the year did start off a little rough.  I had just come off of releasing Battle High 2 A+ on Xbox One in December of 2015, so I was taking a bit of a break from game development in the beginning of the year.  Soon though, I was trying to finish a game for IndieCade, an independent game festival.  The entries were due in May, so I figured I had enough time to get at least a competent prototype done.  I was working on a merfolk themed tactics games with fighting game elements.


Though I made some good progress, I still felt I was rushing and was unhappy with what I came up with.  I wrote about this on Gamasutra.  Since then, I've decided to start the idea over.  One issue with it was that it was starting to feel too copied and unoriginal.  I don't want to use the grid-based system for movement.  In addition, I just wasn't happy with the art.  I want to try something else and I don't want to rush the game for some contest.  Though I think deadlines are important, setting one that is too soon can make the project feel insurmountable.

After taking a break from the merfolk game, I decided to do a small Battle High patch.  I was pleased, once again, with how easy it was to update it through the ID@Xbox program.  In fact, later in the same year, I decided add a new character to Battle High 2 A+ named Beat -- which I wrote about in previous blog posts.


Lowlight:  Oral and Other Health Issues

Before the Beat patch, however, I had some drama.  Around July, one of my teeth started bothering me.  The dentist didn't quite know what was wrong, noticing that the tooth was wiggling a bit.  Because I had trips coming up in October, I was nervous about doing anything major, especially after being told by the endodontist that nothing seemed problematic in the x-rays.  Fast-foward to mid-October, right before Unite (one of Unity's yearly conferences), I go in for a checkup and my dentist discovered the tooth wasn't cracked but that the crown was loose.  She recements it, and the problematic pain returns the following weekend.  I then go through a root canal retreatment -- essentially a root canal on the same tooth.


Overall, this isn't very game development related, but things like tooth pain are distracting.  From July to October I was worrying about my tooth, seeing if it was a gum infection or a cracked tooth, using an over-the-counter bite guard, not wanting to have an unnecessary extraction done, but worrying about it nonetheless.  At the same time, I was also having lower back pain back in February when I was working on the tactics fighter which made working a bit distracting -- this was mostly due to bad posture while working for long hours.  This made me come to the conclusion that I need to be more assertive when it comes to self-care.  I need to be less afraid to get something done instead of waiting-and-seeing, and I need to exercise and do more preventative care.  I need to sleep more and eat healthier.  These are all resolutions, and I've made progress on some.  I've starting speaking to an e-therapist to help with my depression, and I bought a treadmill (though I should have bought an elliptical machine) so I can jog (or at least walk) when it's ugly or too hot outside.

Another good thing that happened though is that around August, I decided to enter Battle High 2 A+ into the indie game showcase at MagFest -- a music and games festival near Washington DC.  It was accepted, which was a great -- yet rather stressful -- experience.  I'll write about that more in detail in my next posts.


I wrote a blog article about accessibility in fighting games, which got featured on Gamasutra.  I was excited to have it featured; however, some feedback on Twitter was rather harsh and made me worry that I had tarnished my reputation somehow, that if I were to release fighting games in the future, the genre's communities would see my name and ignore it.  I realized a lot of the criticism wasn't correct though, that people focused on one small argument while ignoring the a good majority of what I wrote.  What I said is that better tutorialization and simpler inputs could help with fighting game accessibility, not that they were the ultimate or only solutions.

Despite knowing that they are cheesy at times and almost none of them happen, I'd like to make some resolutions or goals for 2017:
Thanks for reading!
Posted by Matthew DeLucas at 5:30 PM No comments: